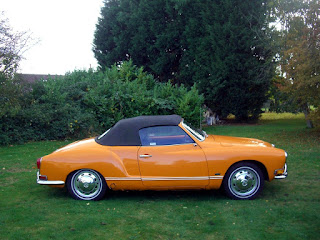 Having restored several vintage motorcycles and built a miniature Land Rover, this is my biggest project yet and looks to be a major challenge. Looking at the photo above, the car looks in fairly good condition, but you will see from the photos that follow that this is not the case. The car requires significant body repairs and chassis repairs and I estimate that, as it took me 2 years to renovate classic motorcycles up to concours standard, then this project is likely to take up to 4 years. So this is going to be a long blog.

My history regarding VW's is that I left school, at the age of 16, and became an apprentice motor mechanic at Beardalls of Nottingham, who were at the time the VW main agents in the area. During this time I worked on all models of VW's and after leaving for a short time to work on other makes of cars, I returned to the same garage as a service advisor. So despite it being a very long time ago, I'm still pretty familiar with how the car works.

So before I start to strip it, let's take a look at what I am faced with: 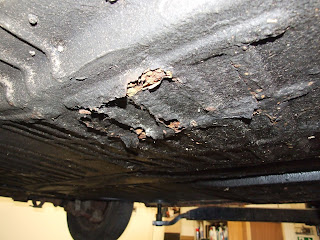 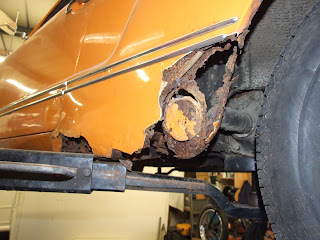 The chassis is in bad condition and needs new floor pans welding in. This will mean removing the whole body from the chassis and then cutting out any rotted panels and replacing them with new ones.


Of great concern are the rear quarter panels, particularly on the near side. These have rotted away. But of greater concern is the fact that this is the last point at which the body is connected to the chassis. Everything rear of this point, where the body continues to the back of the car, simply hangs over the gearbox and engine compartment. 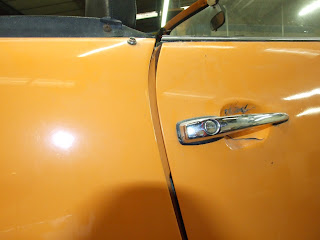 The result of this is that when I lift the car and take the weight off the wheel, the gap between the doors and the body widens. Equally, when I drop the car back down onto its wheels, the gap closes again. This means that the car is literally bending and when I come to welding new quarter panels in place, I will have to ensure that I support the back of the body to close the gaps before welding.

The rest of the body isn't much better. 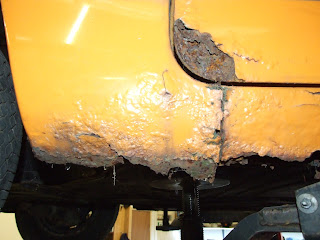 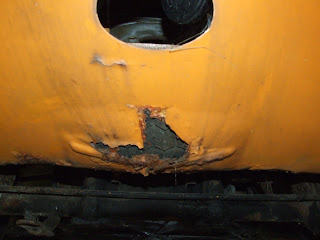 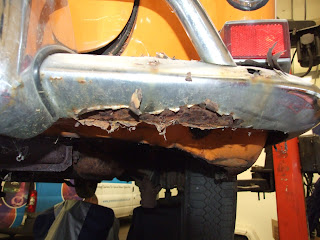 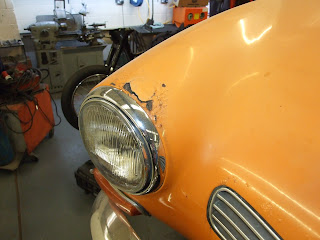 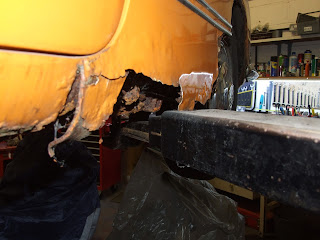 So I'm under no illusion how big a job this is or how long it is likely to take.

The good new is that the 1600cc engine starts and runs OK. Two jobs that I've had to do right away are the petrol tank and the front brakes. 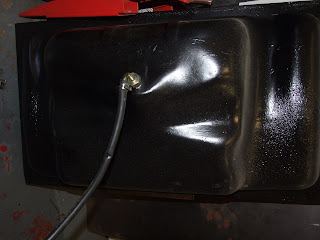 The petrol tank had a bad leak and the smell of petrol was significant whenever you approached the car. I removed it and found that the underside of the tank was perforated so badly that I had to send it away for refurbishment and then had to order a new pipe connector which was also fractured. Well it's back now and looks great, but there is no point in refitting it, as it would just have to come off again. 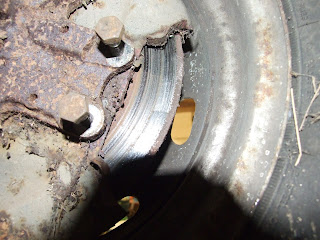 The next problem was the front brakes. These had seized completely and you couldn't turn the front wheels at all. If I'm going to work on this car, I must be able to roll it. So as a temporary measure, I removed the two seized front brake callipers and simply placed them on top of the front chassis, without disconnecting the brake pipes. This also revealed the front discs, which are so badly corroded that they will have to be replaced.


My intention, when this car is fully restored, is not only to show it at rallies but also to use it to tow my motorcycle trailer. This will enable me to enter the concours competitions for both bikes and cars. This however means that I will need to fit a tow bar on this car. This creates two more problems; firstly I have searched the Internet and cannot find a tow bar  available. So I will have to make one. Secondly, I may need to raise the rear suspension a little to accommodate the tow bar. If I am going to do this, I would rather do it now before the car is renovated to avoid possible damage to the new paintwork. Also I need the full weight of the car on the suspension to set the correct height. So I can't commence the stripping process until the tow bar is fitted. So strange as it may seem, that is my next priority.